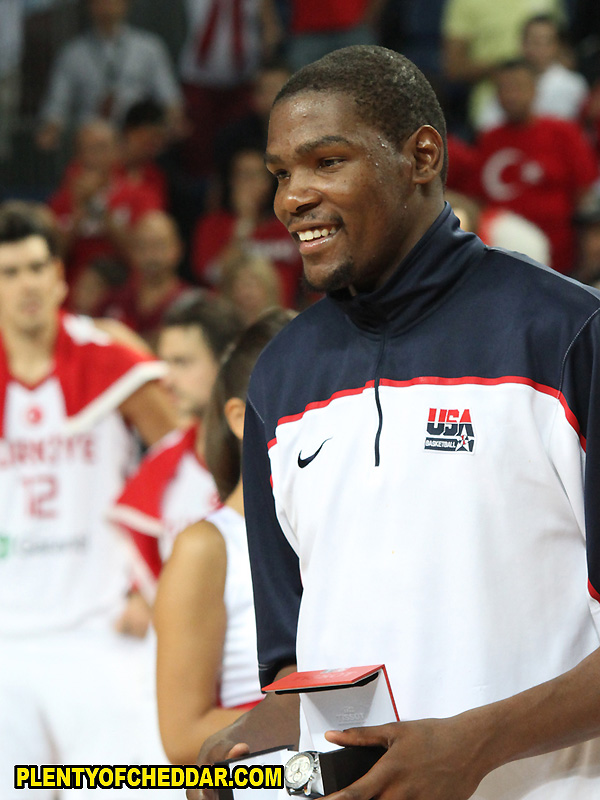 Kevin Durant has an estimated net worth of $25 million dollars.

Kevin Wayne Durant is a DC-born basketball player who has a net worth of $25 million dollars. Durant was born September 29, 1988 in Washington D.C. He is six foot seven inches tall and weighs 235 pounds.

Durant grew up in Washington D.C. with his sister Brianna, two brothers, Tony and Rayvonne, his father Wayne Pratt, his mother Wanda Pratt and his grandmother, Barbara Davis. While growing up Duran played basketball in the Amateur Athletic Union (AAU) for several teams in the Maryland area. He often played against future NBA players Michael Beasley and Ty Lyson. He remains friends with them to this day.

After playing high school basketball at National Christian Academy and one year at Oak Hill Academy, Durant transferred to Montrose Christian School. Before the start of his senior year Durant grew five inches and began the season at six feet seven inches tall. At the end of his senior year he was named Washington Post All Met Basketball Player of the Year and McDonald’s All American and MVP of the 2006 Mcdonald’s All American Game. Before his senior year season started he had already committed to play ball for University of Texas.

Kevin Durant left the University of Texas after his freshman year to enter the NBA draft where he was selected by the Seattle SuperSonics. He was named NBA Rookie of the Year in 2007 and was the top scorer in the NBA for the 2009-2010 season, becoming the youngest player to earn the title. After the 2007-2008 season, the SuperSonics were moved to Oklahoma City and renamed the Thunder. During his five year NBA career so far, Kevin Durant has earned $35 million in salary alone. His highest earning year so far has been the 2011-2012 season when he was paid $15.5 million. Durant was the NBA rookie of the year for the 2008 season, a three time NBA All-Star, and a three time scoring champion.

Kevin Durant’s net worth could buy:

Kevin Durant has enough money to give every single person living in Afghanistan $1.