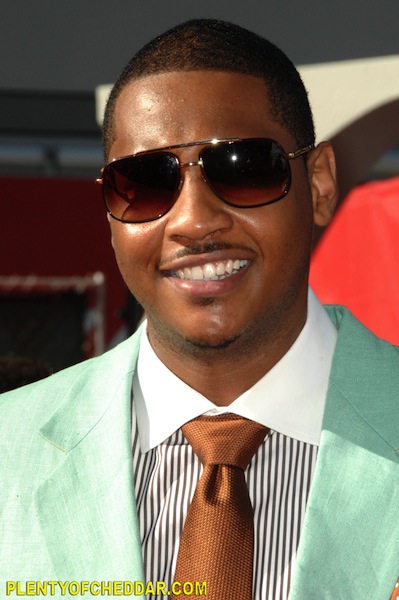 Carmelo Anthony has an estimated net worth of $60 million.

Carmelo Anthony an American professional basketball player with an estimated net worth of $60 million. Anthony is 6’8″ tall and weighs 229 pounds. Carmelo Kyam Anthony was born on May 29, 1984 in Brooklyn, New York.  He was born to a Puerto Rican father and an African American mother and was named after his father, who died of cancer when Carmelo was 2. The family moved to Baltimore when he was eight and that’s where Carmelo developed into a highly touted high school basketball player. In the summer of 1999, Carmelo grew five inches and was named The Baltimore Sun’s metro player of the year for his high school team, Towson Catholic High School.

Although many of the country’s top prep basketball players were going straight into the NBA, Carmelo chose to enroll at Syracuse University in 2003 and led the Orangemen to an NCAA Championship in his first and only year. He was named the Final Four’s Most Outstanding Player. Although he had originally planned to play two years of college ball, he made the jump to the pros after his freshman year, declaring for the 2003 NBA Draft. He was selected third overall (LeBron James was taken first) in what many believe was the most outstanding draft class in history. Carmelo immediately improved the fortunes of the team that drafted him, the Denver Nuggets, turning the from a laughingstock the year before to a playoff team.  In total, he played 8 years for the Nuggets averaging over 20 points a game every year and being named an All-Star several times.

In 2011, Carmelo refused to sign a contract extension with the Nuggets, instead pushing for a trade to his hometown New York Knicks. He immediately improved the fortunes of the team and led them to the playoffs as a sixth seed that year. His next two seasons also resulted in playoff runs – they won the Atlantic Division in 2012-2013 – although have yet to taste significant playoff success. Carmelo is widely considered among the top scoring players in the league, having won the scoring title in 2013. Carmelo married television personality La La in 2010 and has a son with her. He has also won two Olympic Gold Medals with the U.S. Basketball Team in 2008 and 2012.

Carmelo Anthony’s Net Worth Could Buy:

Carmelo Anthony has enough net worth to give every person in Italy $1.