Yesterday the internet was a-twitter over a Thrillist article titled: “How To Make a Cup of Coffee That Costs $54,562″. The article was a guide on making the most expensive cup of coffee imaginable. They showcased items like Pure Unroasted Green Bali Arabica Kopi Luwat Civet Coffee Beans for $129 per half kilogram. They also attached a link to purchase the Hottop KN-8828P-2 Programmable Digital Drum Roaster for $1000. If you purchased all the items on their list you would definitely have an expensive cup of java, but the most expensive? Hardly.

Actually, the world’s most expensive coffee set went up for auction in June 2013 at Christie’s in London. A ten inch tall jug was auctioned off for the price of $7,453,3500. The coffee pot is obviously not just any old yard sale coffee pot. This pot is a piece of work from Rococo artist Paul de Lamerie (1688- 1751), the greatest silversmith working in Britain in the 18th century. The George II coffee pot weighs 34 ounces and was created in 1738 as a custom piece for a London merchant named Sir John Lequesne. Before its sale in 2013, the piece was the centerpiece of the British Silver exhibition at the Metropolitan Museum of Art. 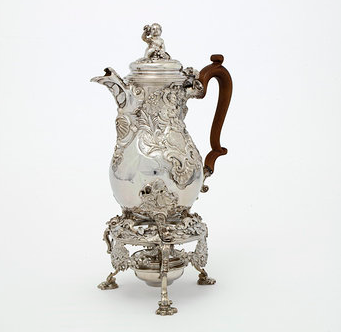 The history of coffee in London is very interesting. The first London coffee house was opened in 1652 by a member of the English Levant company, Pasqua Roseé. Roseé had returned from a trip to Turkey where he developed a taste for coffee and decided the stimulant would do well in London. The idea of the coffee house caught on and spread around the city. Each coffee house had its regular crowd. Some were politicians, some were poets, others were merchants or bankers. 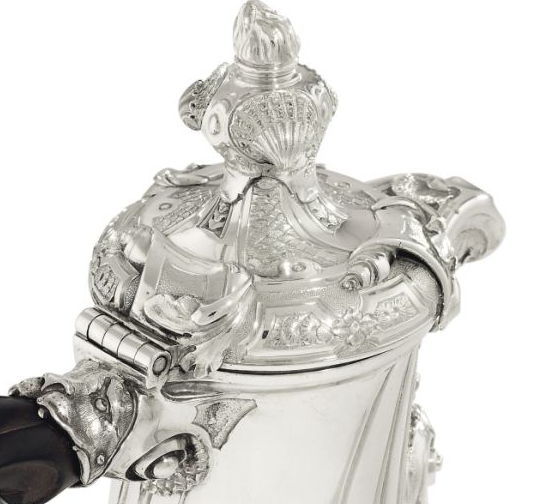 When Cromwell rose to power he closed the coffee houses, declaring them meeting places that offered nothing but bad ideas and caused dissent. When Charles II took over he reopened he coffee houses and ushered in the Enlightenment. As coffee became en vogue once more, wealthy families had beautiful sets hand forged by craftsmen and silversmiths, such as the de Lamerie pot.