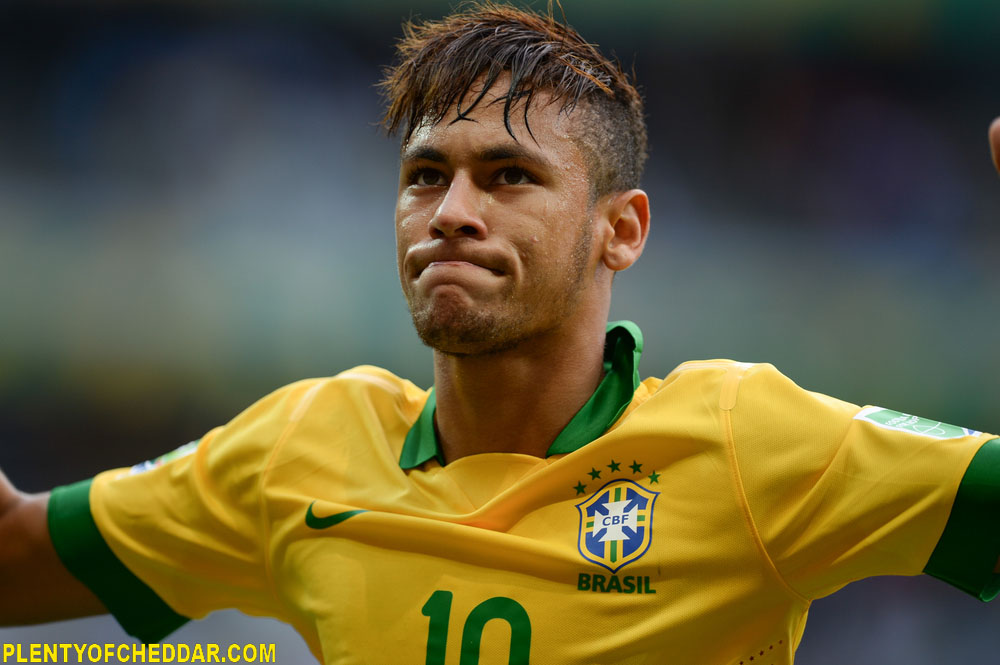 Neymar is a Brazilian soccer player with an estimated net worth of $13 million. He currently plays for FC Barcelona as a forward and for the Brazilian national team. Neymar is 5’9″ and weighs 142 pounds. Neymar da Silva Santos Júnior was born February 5, 1992 in Mogi das Cruzes, Brazil. Neymar’s father was also a professional soccer player in Brazil. Like so many Brazilians, Neymar grew up playing soccer on the street, the beach and playing futsal. In 2003, at the age of 11 he moved to Sao Vicente to begin training with the youth team Portuguesa Santista. Less than a year later, he would join one of Brazil’s storied teams, Santos FC, and play with their youth team. Neymar was a prodigy and he excelled in the youth ranks until the age of 17 when he signed a full professional contract and began playing the Santos’ first team.

In his first professional season, Neymar scored 14 goals in 48 games and his potential was clear to everyone in Brazil and beyond. His second season in 2010 was even more spectacular scoring a total of 42 goals in 60 games and drawing comparisons to Brazilian legend Pele. His age and skill also began to draw interest from major European teams who started making offers to Santos to acquire Neymar. Despite mounting pressure every season, Neymar would stay with Santos until 2013, scoring 136 goals and leading the team to a number of league titles and the Copa Libertadores (South America’s version of the Champions League tournament).

In 2013, after years of speculation, Neymar finally completed his move to Europe when he agreed to terms to join Spanish heavyweight FC Barcelona. The team has been among the most successful over the last decade and boast an all-star lineup featuring Lionel Messi, widely regarded as the best player in the world. Despite speculation that the two star players would not be able to co-exist, they started out with a great understanding and success, before Messi was injured and sidelined. Neymar has already displayed the skill that made him the most sought after talent on the planet. He will lead the Brazilian national team as it tries to recapture the FIFA World Cup which will be played in Brazil in 2014. Since his rise to prominence, Neymar has been a magnet for major endorsements signing with Nike, Panasonic, Volkswagen and other major brands. He is dating Brazilian actress Bruna Marquezine and has a child with another woman.

Neymar’s Net Worth Could Buy:

Neymar has enough net worth to give every person in Zimbabwe $1.