Last night’s Grammy Awards were filled with dazzling performances (oh hey, Beyoncé), weird robot men (oh hey, Daft Punk), and expensive outfits (oh hey, everyone in attendance.) Want to know how much money your favorite stars were wearing on their bodies last night? We try out best to break it down for you here: 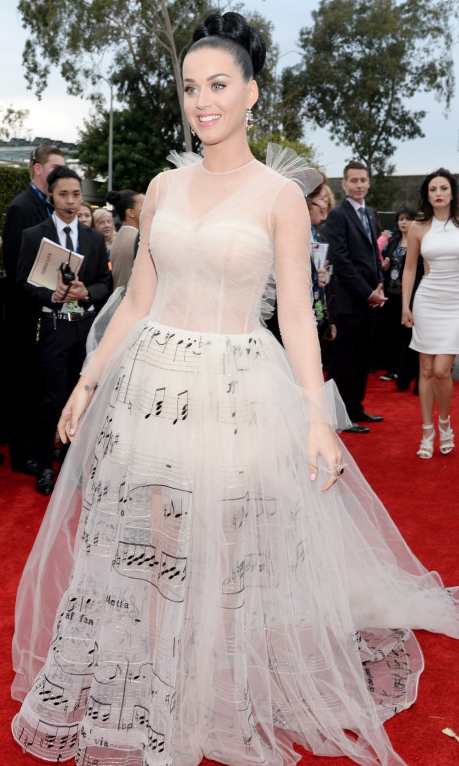 Nominee Katy Perry chose an understated (for her) and elegant dress from master designer Valentino. The dress debuted at Valentino’s couture show last week in Paris and Perry decided she had to have the dress for the Grammys. We aren’t totally sure of the price but we’re estimated that it’s around $10,000.

Michael Costello had to beat out such well-known designers as Valentino, Eli Saab, and Donatella Versace for the honor of dressing Queen Bey for the 2014 Grammys. Costello’s dress is entirely handmade illusion mesh and lace with a horsehair wire hemline. The dress was made less than two weeks ago when he got the call that he would dress Beyoncé. Costello has ready-to-wear pieces starting at $300 and gowns starting at $995. He has once gown in his collections priced at $65,000, which we believe puts Beyoncé’s dress around $20,000.

Pregnant singer Ciara showed off her baby bump in a belly-hugging metallic gold Emilio Pucci gown. The gold, long sleeve dress was custom made and sequined from head-to-toe. The singer told E!’s red carpet correspondent that she was “really good, really comfortable. I [just] ate a club sandwich and fries.” Which is more than most of the presenters, performers, or attendants could say. Her skintight dress was sexy without going overboard and showed off her trim body while flaunting her sweet little bump.