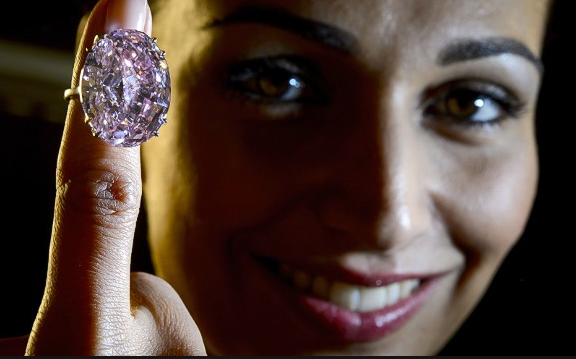 The diamond is graded as Type IIa, which is extremely rare for a pink diamond, let alone one of such size and color. The diamond took over two years to cut and is twice the size of the Graff Pink (formerly known as the world’s largest pink diamond). While the per-carat price for the Pink Star has yet to be released, the past record setting diamond price per carat for a fancy pink diamond was $2,155,332. That 5-carat stunner was sold in Hong Kong in January 2009.

While pink diamonds are certainly a girly girl’s best friend, the most expensive colored diamond is an orange diamond known as “the Orange”. The diamond is a 14.82-carat fancy vivid orange that sold a day before the Pink Star for $2,398,151 at the Christie’s Geneva Magnificent Jewels auction.

The owner of the Pink Star has not been revealed although we’d like to think it was purchased by our adoring boyfriend. The Pink Star is truly a magnificent piece, cut from a 123.5-carat rough and unveiled to the public in May 2003 as the Steinmetz Pink. Here’s wishing its recipient a life filled with love and lots more diamond.