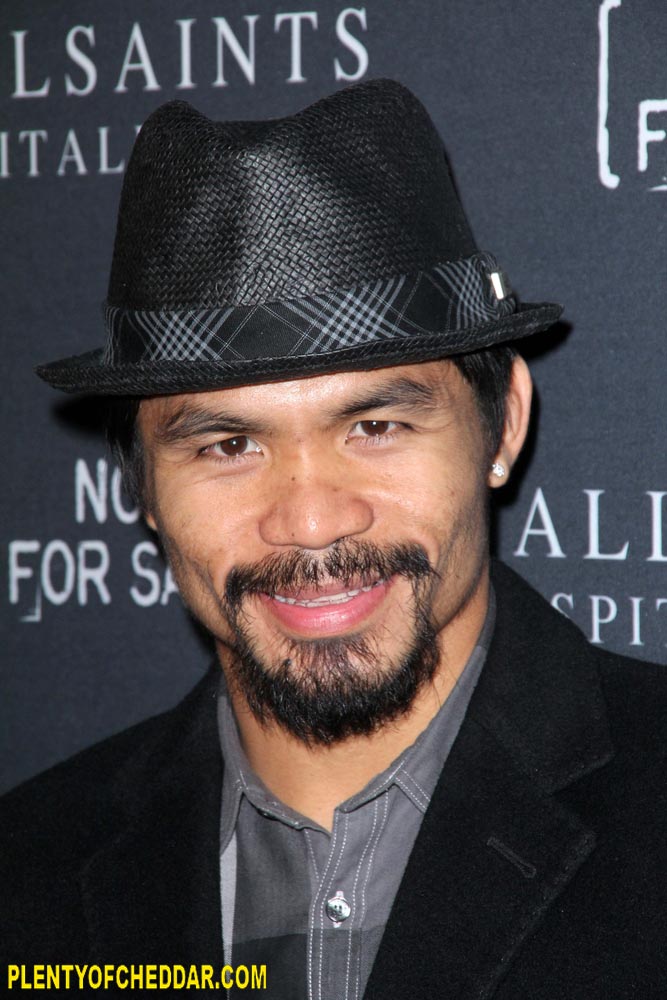 Manny Pacquiao has an estimated net worth of $85 million dollars

Manny Pacquiao is a professional boxer from the Philippines with an estimated net worth of $85 million.  Pacquiao won the Best Fighter ESPY Award in 2009 and 2011. Pacquiao is the second highest paid athlete in the world.  He is 5’7″ and weighs 144 pounds. Emmanuel Dapidran Pacquiao was born on December 17, 1978 in Kibawe, Bukidnon, Phillippines. Pacquiao was one of six children and his parents separated when he was in the sixth grade. He dropped out of high school because of the family’s poor economic circumstance and left home at 14 and lived for a time on the streets. He began boxing and made the Philippine national amateur boxing team, which paid his room and board.

After compiling an impressive amateur record (reportedly 60-4), Pacquiao turned pro when he was only 16 years old and very small, 4’11” and 98 pounds. Beginning in 1995, Pacquiao won his first 11 fights over a year until he lost to in  1996 in a fight where he was forced to use heavy gloves because he failed to make the required weight. He would then go on a 15-bout win streak on his way to winning his first title. After losing his second fight in 1999, he would vault to world prominence by defeating higher profile and international opponents, including Marco Antonio Barrera and Juan Manuel Marquez in the early part of the century.  After his third loss in 2005 to Erik Morales, he would  be recognized as the best pound-for-pound boxer in the world, winning his next 15 fights with victories over such notable opponents as Ricky Hatton, Miguel Cotto, Shane Mosley, Oscar de la Hoya, as well as his next two fights against Marquez. In 2012 he would lose a controversial decision to Timothy Bradley and his next fight, his fourth bout against Marquez.

In his career, Pacquiao has become the first and only 8-division champion in boxing, winning ten world titles in four different weight classes. He was named the fighter of the decade by the Boxing Writers Association of America, World Boxing Council and World Boxing Organization. Pacquiao has gained almost as much fame for a fight he has not had, than for the fights he has. His ongoing rivalry with Floyd Mayweather, Jr. has made headlines for years, with the two iconic boxers so far unable to agree to terms of a mega-bout. Pacquiao has become a worldwide celebrity thanks to his exploits in the ring and he has parlayed that celebrity to a number of pursuits, including being elected to Congress in the Philippines. He is also an accomplished singer and has acted in a number of television shows and movies. His celebrity has earned him additional millions in endorsements. Pacquiao is married and has four children.

Manny Pacquiao’s Net Worth Could Buy

Manny Pacquiao has enough net worth to give every person in Egypt $1.