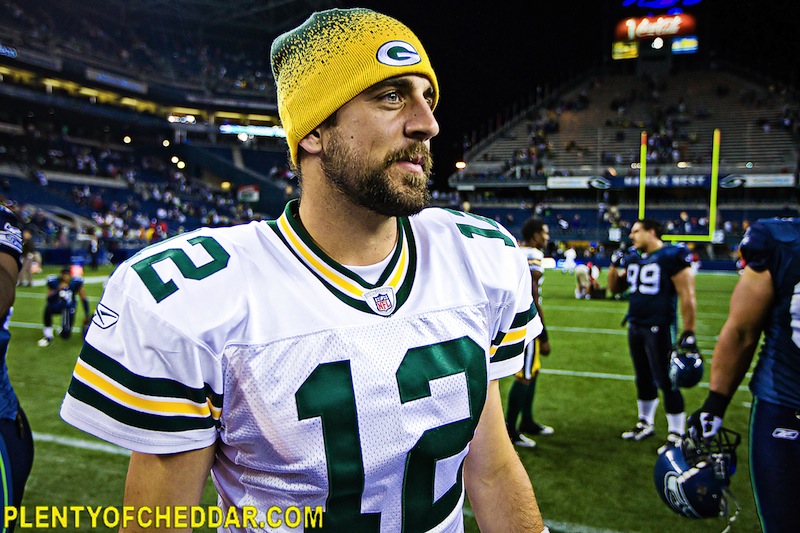 Aaron Rodgers has an estimated net worth of $18 million.

Aaron Rodgers is an American professional football player with an estimated net worth of $18 million dollars. Rodgers is 6’2″ tall, weighs 225 pounds and currently plays quarterback for the Green Bay Packers. Aaron Charles Rodgers was born on December 2, 1983 in Chico, California. Aaron’s father was a chiropractor who played college football and encouraged his son to seriously pursue football. Aaron was a standout at Pleasant Valley High School, setting numerous records. Despite his achievements, he was not recruited heavily by major colleges to play football and had to settle to play for a local community college. After only a year there, however, he attracted the attention of coaches at the University of California, Berkeley and was given an athletic scholarship in 2002. Aaron won the starting job in the fifth game of his first season with the team and would go on to have a very successful three years in college. He elected to skip his senior year and enter the NFL Draft in 2005.

Although Aaron was expected to be drafted No. 1, he slipped to the 24th pick. He has since said that the disappointment of that day served as motivation for him to have an exceptional career. Even so, Aaron saw little action in his first three years in the league as he backed up future Hall-of-Famer Brett Favre. In 2008, Aaron finally got his chance after Favre announced his retirement – although he would later change his mind, the team traded Favre to the New York Jets in a controversial move as they backed Aaron. The move turned out well for the Packers as Aaron was an immediate success, proving his worth as one of the best quarterbacks in the NFL in his first starting season. Aaron was even more successful the next year, leading the Packers to the playoffs and being named to the Pro Bowl.

In 2010, Aaron led the Packers to the playoffs and then on one of the greatest postseason runs in league history, culminating in a Super Bowl XLV win against the Pittsburgh Steelers. Aaron was named the Super Bowl MVP. In 2011, the team seemed poised for another Super Bowl win as they started the season 13-0 and with Aaron winning the league MVP, however, the Packers lost to the eventual Super Bowl champs in the playoffs. Aaron continues to be rated as one of the best quarterbacks in the league and is on track to be considered one of the best ever. His celebrity stature has increased along with his on-field performance as he is the star of the State Farm Double Check commercials and his currently the highest paid NFL quarterback and among the highest earners in the NFL according to Forbes.

Aaron Rodgers’  Net Worth Could Buy:

Aaron Rodgers  has enough net worth to give every person in Chile $1.08.