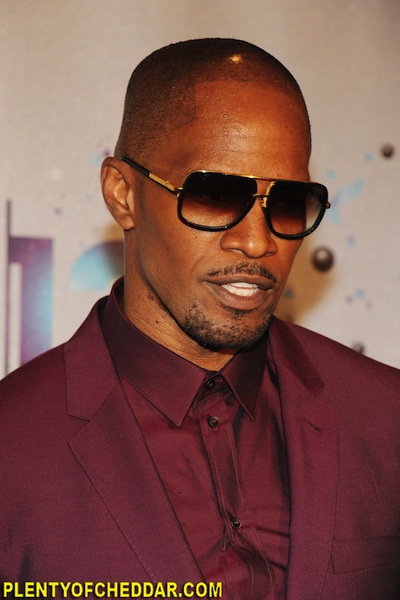 Jamie Foxx has an estimated net worth of $85 million dollars.

Earl Marlon Bishop better known by his stage name “Jamie Foxx” is an American stand-up comedian, actor, and singer/songwriter with an estimated net worth of $85 million dollars. Foxx is 5’9″ and weighs 190 pounds. Foxx was born December 13,1967 in Terrell, Texas. His biological parents were not present in his life. Foxx was raised by his maternal grandparents. Jamie started playing the piano by the age of five and sang in his Baptist church choir. In grade school Jamie was dubbed the class clown. His teacher would allow him to tell the class jokes if they behaved well. In high school, Jamie played basketball and football. He had ambitions of one day playing for the Dallas Cowboys, but fate had something else lined up for him. Jamie received a scholarship to attend United States International University in San Diego, CA where he studied music. His college girlfriend dared him one night to perform stand up at the local comedy club. He accepted the challenge and performed during open mic night in 1989. This is when his career began.

Jamie decided to adopt the name “Jamie Foxx” in tribute to comedian Redd Foxx. He dropped out of college to follow his dreams in Los Angeles. That same year, Foxx was cast on the comedy show In Living Color. Due to his popularity on In Living Color, Jamie was given The Jamie Foxx Show in 1996. His show stayed on air for five years. In 1999, Foxx made his big screen debut in Oliver Stone’s Any Given Sunday. He played the role of football star. The role showed the world that Jamie had range as an actor to do comedic and dramatic works.

As a musician, Jamie has received success as well. His 2006 album Unpredictable reached the top of pop and R&B charts and earned double platinum status per RIAA standards. This is due in part to the success of hits like “Gold Digger” which featured Kanye West and “DJ Play A Love Song”. Foxx is a genuine triple threat with many successful years to come.

Jamie Foxx has enough net worth to buy:

Jamie Foxx has enough net worth to give everyone in Egypt $1.02.